Peer review in its many incarnations is essential to the functioning of the research enterprise, yet it is not without weaknesses. Various forms of bias, for example, threaten the integrity and effectiveness of peer review at journals, funding agencies, and even for programs within institutions.

Recent innovations and scholarly research on peer review can help program administrators, reviewers, and award committees improve practices and mitigate bias. The U-M Office of the Vice President for Research has prepared this guidance on strategies to reduce bias in peer review, with a focus on internal award nominations and funding programs. The intention of this information is not to make peer review an unnecessarily onerous task for any one particular group, but to help educate the research community and ensure internal review practices are equitable and transparent. 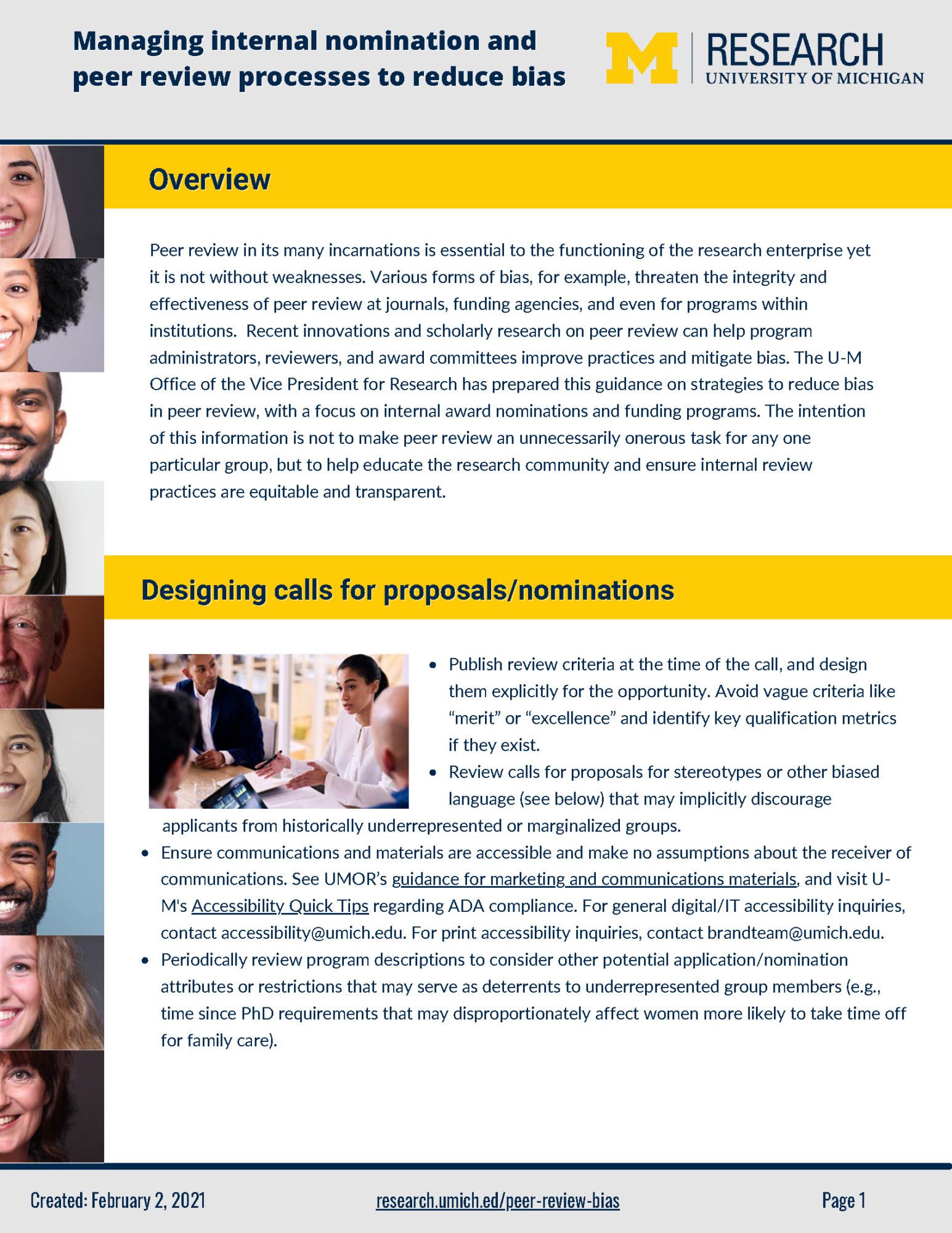 Designing calls for proposals or nominations

Whether reviewing an award application or writing a nomination letter, it is important to avoid using biased language. Biased language can reinforce other implicit or explicit biases, and ultimately influence decisions around research awards and funding. This overview, based on other guidance documents (e.g., University of Arizona, Western Michigan University) provides tips for how to avoid biased language, common examples, and alternatives to consider in research-specific contexts.

Using gender identifying information when discussing a proposal or applicant does not typically add substantive information during peer review. For women or non-binary genders in particular, this could reinforce that they are in the minority of applicants and could reinforce biases held by other reviewers, committee chairs, or program administrators.

Use preferred pronouns when known and/or necessary

When necessary to discuss or evaluate an applicant, and when known to the evaluator and/or committee, use a person’s preferred personal pronoun of he, she, they, or ze. If unknown, avoid making an assumption about preferred gender or pronouns and use an inclusive substitute such as their instead of guessing or intentionally indicating uncertainty.

Including one’s personal opinions about the applicant, field or study, or other unrelated criteria can introduce or reinforce certain biases. This is especially true when they are personal opinions that are unsupported by useful information for the reader.

Be specific when warranted

When writing about certain groups, be as specific as possible. Without such detail or justification, readers can make inaccurate assumptions that may lead to biases.

Although there are many commonly used phrases that are gendered (e.g., those that contain variants of man), suitable non-gendered alternatives almost always exist. Use this phrasing to be more inclusive and help avoid biases that may arise, whether conscious or unconscious.

Avoid commenting on aspects of an applicant’s C.V. or proposal that are irrelevant to the actual review criteria. For applicants or nominees that are underrepresented minorities, this can lead to biases that disproportionately favor majority groups.

Some commonly used phrases have racist roots, yet are so ingrained in the lexicon that a writer may not have recognized their origin or original meaning (e.g., “master” research agreements, uppity, peanut gallery, “black” mark). In nearly all cases, there are suitable alternatives to use that don’t have the potential to elicit or perpetuate bias. Federal agencies such as the National Institute of Standards and Technology have recently initiated similar efforts to avoid such terminology.

Some of these publications may require a subscription to access. For members of the U-M community, refer to the U-M Library for assistance on accessing resources off-campus.

Questions?
If you have any comments or questions, please contact U-M Research (umresearch@umich.edu).