Researchers from around the world study U-M’s massive paleontology collection in order to uncover earth’s untold stories going back as far as 2.1 billion years ago. From ancient plant fossils to more recent mammoth and mastodon skeletons found in Michigan, the University of Michigan Museum of Paleontology is a research museum with a collection of around four million specimens.

“These kinds of collections are like a reservoir. They’re an archive of the history of life on Earth. It’s like a library of Earth’s story. And as museum folks, we are the librarians who help not only ourselves, but our colleagues navigate that incredible archive that tells this story that’s played out over billions of years.”

Matt Friedman was a frequent visitor of the museums near where he grew up on the west side of Cleveland. They housed significant collections of the fossils collected just a few miles from his house, a hot spot for fish fossils from the Devonian age, about 360 million years ago. Summer programs, field experiences, and presentations by museum staff allowed Friedman to recognize that studying paleontology was a possible career path.

“These ancient fishes looked robotic and strange and were just calling out for someone to look at them and figure out how they lived and what they did.” 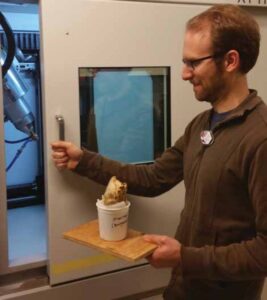 Prof. Friedman is performing a CT-Scan of a Michigan Wolverine skull.

One of the reasons Friedman chose to join the U-M Museum of Paleontology (UMMP) was because of the opportunity to serve as both a museum curator and researcher, while still being an educator. Friedman started at U-M when exhibits for the Natural History Museum’s move to the Biological Sciences Building were being designed. This gave him the unique opportunity to help develop exhibits that would showcase the paleontological resources available at U-M.

“Because the public-facing parts of museums were my gateway to science, I’ve always felt really passionately about how we depict science for visiting members of the public. We display the things that we understand best and are the most complete specimens. But if you go behind the scenes of the collection, then you realize that there are loads of questions that remain to be answered.”

Friedman’s research is primarily on the fossil record of fishes, focused on the impact of the end-Cretaceous extinction (the event that marked the end of dinosaurs) and how fish lived and evolved in response to changes in their environment.

While his interest is focused on just one branch of the many kinds of fossils stored at the UMMP, his research aims to answer questions that cross many different fields. One of his current projects is working to expand the study of fish fossils located in the tropics, an area that is known to have the greatest concentration of species diversity for most plants and animals but is not as well studied as North America or Europe.

“​​In the absence of knowing what the deep history of those groups was in tropical areas, our understanding of their evolutionary history is incomplete.” 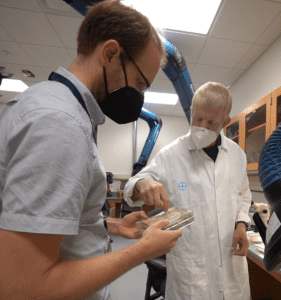 This location is also important because it provides a fossil record of how plants and animals responded to a series of episodes of rapid climatic warming that are maybe the best analogs for climate change.

His long-term research goals include utilizing the latest scanning technology to help create systems that allow greater sharing of data among his colleagues, and people outside of higher education.

“I’m interested in generating versatile archives that are available to people all around the world in a way that democratizes our discipline.”

Friedman asserted that there is more than one way to be a paleontologist and nonprofessionals have made significant contributions to the museum through both individual discoveries and the donation of significant collections.

“There are many ways to make contributions to our understanding of the history of life on Earth, either through museum collections or even through databases that archive the collected information we have on the fossil record.”

He also emphasized that while students interested in paleontology should start their studies with a focus on biology and geology, having a broad understanding of other disciplines outside of the natural sciences is a crucial part of being a well-rounded researcher. 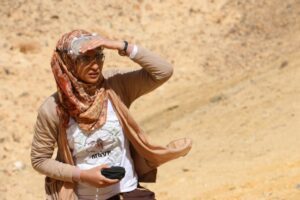 During her third year at Mansoura University, Sanaa El-Sayed asked her advisor, the first person in Egypt to receive a PhD in vertebrate paleontology, to join his lab and help build the paleontology program for other Egyptian students.

She has since become a team leader, lab manager, and the first Egyptian woman to lead an international peer reviewed paper on vertebrate fossils. She plans to continue teaching and encouraging Egyptian students to expand the field of Egyptian paleontology.

“My plan for coming to Michigan was to study hard, learn new stuff, and then go back to Egypt to build this lab and transfer the knowledge that I have learned here to the others to help them build the future.”

One of the reasons El-Sayed chose to join the U-M Department of Paleontology was because of its extensive Egyptian collections. 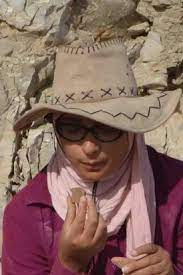 Sanaa El-Sayed looking at a fossils while on a research trip.

“I walk in the museum and there are pieces and fossils from Egypt in the exhibits, it makes me feel like a piece of my home is here.”

El-Sayed exclusively works on the fossils she has discovered herself in the field. Her past papers include work on the most complete and first marine catfish found in Wadi Al-Hitan (Whale Valley) in the Western Desert of Egypt. She was also on the team that discovered the partial skeleton of a new titanosaurian sauropod dinosaur in western Egypt’s Dakhla Oasis.

“It’s always interesting to go in the field knowing nothing about what you’ll find, hoping to find obviously good stuff. But then it’s always surprising to see something in the field for the first time. You’re always learning something new.”

Her advice for students interested in studying paleontology is to work hard and never be afraid to ask for help.

“I haven’t met actually anyone in paleontology that is not willing to give help.” 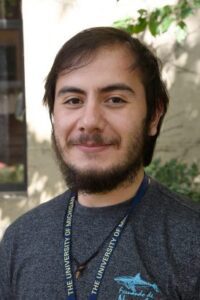 From a young age, Rodrigo Tinoco Figueroa knew he wanted to study fossils and eventually earn a PhD in paleontology. Documentaries and movies about dinosaurs, like Jurassic Park, were factors, but the greatest influences were the trips he would take to Costa Rica for fieldwork expeditions with his family and the National Museum in Rio de Janeiro in Brazil.

“I was like maybe six or seven when I decided I wanted to study anything that’s related to paleontology.”

He choose to attend the University of Michigan because of the connection he made with Professor Matthew Friedman while earning his bachelor’s degree in biological sciences from Universidade Federal do Estado do Rio de Janeiro.

Figueroa’s favorite part of his work is being able to discover new fossils in the field, and being the first person to see a new fossil. 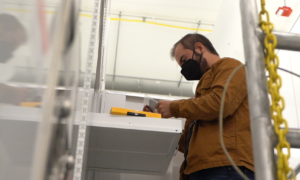 “That’s what motivates me to keep working mostly, but also, I really like going through collections and looking at a fossil that has already been collected not only because of the fossil itself but the history of the collection, where they were collected, who collected them, why and when. It’s all part of the work that’s super interesting for me.”

Figueroa recently returned from a trip to Brazil, where he does most of his work. He plans to continue his research focused on questions around understanding the early diversification of the fish from the early Paleozoic era, which quickly became the most diverse group of vertebrates.

“​​I’m always tangentially working with fish and different aspects of fish evolution. But what I’m trying to work mostly on is the evolution of fishes, exploring more directly the Paleozoic fossil record of South America, which is very poorly understood in relation to Europe and North America.”